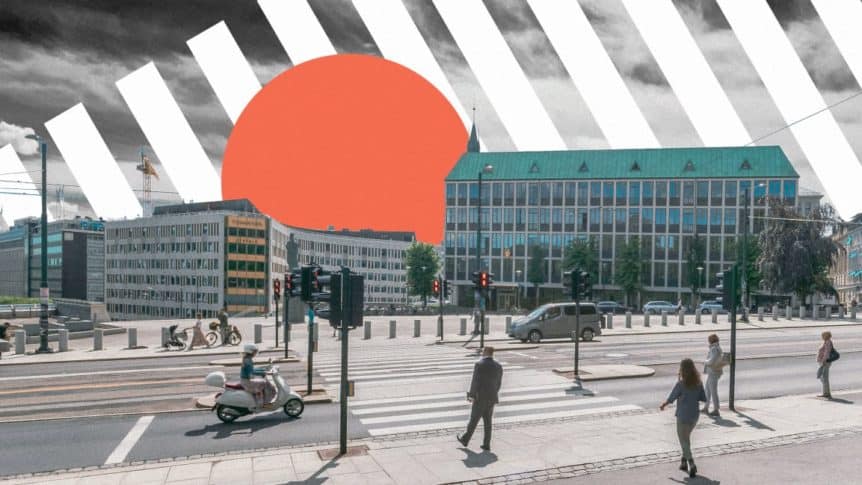 In many American cities, pedestrian and cyclist deaths are climbing—even in cities that are aiming to eliminate traffic deaths and injuries through “Vision Zero” goals. In San Francisco, where 18 pedestrians were hit and killed by cars last year, along with 10 people in vehicles and one cyclist, the city declared a state of emergency for vehicle safety. In New York City, as of late December, 114 pedestrians had been killed in 2019, and there were more than twice as many cyclist deaths as the year before.

In Oslo, Norway, by contrast, there were zero pedestrian deaths in 2019. There were also zero cyclist deaths. Only one person died in a car crash, a driver who ran into a fence. The city is smaller than San Francisco and New York but roughly the same size as Portland, Oregon—another city that wants to eliminate traffic deaths—where 49 people were killed in car crashes last year.

What’s the difference? At a national level, Norway has more political support for ending “accidents” that can be avoided through better infrastructure design, more traffic enforcement, and other changes in policy. “The most important [factor] might be that road safety has been a priority for many years and has given us a reduction of road deaths, from 560 people yearly in the 1970s to 110 deaths in 2019,” says Christoffer Solstad Steen, who works with Trygg Trafikk, an Oslo-based organization that focuses on traffic safety. “When many stakeholders—government, locals, organizations—work together with a shared vision of zero deaths and heavy injuries, it gives results over time.”

In Oslo, the city has cut speed limits and implemented new zones where cars are no longer allowed to pick up and drop off children outside elementary schools. It’s improving public transit and its local bike share program so fewer people want to drive in the first place. And in the city center, Oslo made the radical decision to take out hundreds of parking spaces, add bike lanes, and make some streets completely off-limits to cars, so there is now essentially no traffic in the area. The move to a car-free city center was motivated by the environment, since the city wanted both to cut air pollution that was harming health locally and to cut climate emissions. But it also helps safety. “With fewer cars in the streets you will have fewer incidents between cars or heavy vehicles and bikes or pedestrians,” Steen says.

American cities haven’t gone as far yet. “In most of our cities and our nation, we don’t prioritize human life,” says Danny Harris, the executive director of Transportation Alternatives, a nonprofit that advocates for better walking, biking, and public transit in New York City. “We’re prioritizing traffic and the movement of vehicles.” But he says that progress is happening, especially in New York, where the city council now talks about “breaking the car culture” and plans to add new protected bike lanes and bus lanes.

Cars coming into busy parts of Manhattan will soon be charged a congestion fee, which will reduce the number of cars on the street. Over the holidays, streets around Rockefeller Center were closed to cars, something that could theoretically be expanded and made permanent as in Oslo’s city center or Barcelona’s superblocks, another urban design that restricts cars across neighborhoods. “I think we have enough data points to show that this works in other cities . . . . We have a real opportunity to build a future that’s around people instead of cars,” says Harris.

Oslo itself isn’t perfect, as someone from the city’s transportation and environment department pointed out on Twitter. Achieving true “Vision Zero” also means eliminating serious injuries from traffic accidents, something that hasn’t yet happened in the Norwegian capital. But by eliminating pedestrian and cyclist deaths, and nearly eliminating driver deaths, it proves that better policy can work.