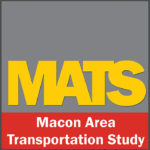 MATS was originally founded on February 21, 1964, by designation of the Governor and adoption of a Memorandum of Understanding (MOU) between The City of Macon, the County of Bibb, the Municipality of Payne City, the Georgia State Highway Department (now the Georgia Department of Transportation) and the Macon-Bibb County Planning and Zoning Commission.  The roles and responsibilities of MATS are covered by the MOU. Over the years, MATS has expanded geographically to include portions of Jones County and Monroe County as a result of the region’s growth.  Additionally, other agency partners such as the Middle Georgia Regional Commission and the Macon-Bibb County Transit Authority have also been added. From time to time, the documents authorizing MATS need to be updated to reflect new circumstances.  For example, the most recent change to MATS happened in June 2015 and November 2015, when Payne City was removed from the MOU, and Macon-Bibb Industrial Authority replaced Payne City on the MATS Policy Committee. This was done to account for the dissolution of Payne City by the Georgia Legislature, after the Macon-Bibb government consolidation.